Here Is an Unique Aircraft - The Ground Effect Vehicle

To be honest I learned about ground effect vehicles from our reader who posted a comment in the article about personal hovercraft. Up to this point I thought hovercrafts were the strangest kind of aircraft out there. Well, here are very similar and maybe even more interesting developments.

So, What Is a Ground Effect Vehicle


Based on the way ground effect vehicles ("WIG planes") fly, they are quite similar to hovercrafts because they use a similar cushion of high-pressure air. But while hovercrafts usually have a vertical propeller, the cushion effect in WIG planes is created by the aerodynamic interaction between the surface and the wings. The same ground effect exists in regular aircraft like described here.

Although there isn't much information about the sea skimmers (another name for ground effect vehicle) online, there are companies who manufacture such aircraft mostly as recreational toys or small ferries. For example see this video of a WIG plane called The Scimmer.

There are plans for a huge sea scimmer to be developed for the general aviation. The prototype is called The Pelican and will be developed by Boeing. I can't find reliable information when exactly this is going to happen however. 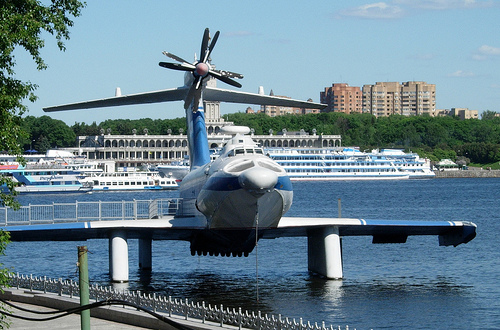 Of coruse the main interest to these vehicles was first coming from the military forces.

One ground effect vehicle needs less fuel than an equivalent airplane, and could be considered safer because it flies closely above the sea. There are good reasons for the aviation engineers to keep digging around and trying to solve some practical problems in these vehicles.

And Can You Have or Build One?

Owning a ground effect vehicle could be a problem because there is not enough clarity regarding the classification and licensing. In USA however you don't need a pilot's license to fly a hovercraft - the only requirement is to have 160 training hours. Similar or the same regulations should apply to other types of sea skimmers, but I recommend you ask the specialists in the company who offers the one you plan to buy.

There are just few commercially available WIG planes with probably the L-325 Flarecraft being the most popular. Plans for it and for some military WIG planes can be found mostly for building scale models.

You can eventually look for personal recreational sea skimmers at companies and places who sell flying boats, but for now the most common recreational craft of this category remains the hovercraft.

I was able to find some offers on Alibaba though, so if you really die to own a ground effect vehicle, you can find one for you.

The topic about ground effect vehicles is interesting mostly because of the future developments. Since these vehicles are still far away from popular, well tested and well accepted, it's better to stick to the hovercrafts or the "normal" homebuilt aircraft.

Of course there are many places where you can read more about these exceptional vehicles - I have already linked to several interesting sources in this article. If you want to read further, this book called Extreme Machines

contains some information about them, and not only. Or you can get this expensive book about - that's almost everything that can be found about these interesting airplanes.

Grund effect flight machines were studied by russians since the early fiftyes.

The Ecranoplan Project produced machines for 50 or more passengers, sliding on an air cushion in ground effect in between the wings and the ground, pulled by propellers (that enhanced the ground effect at slow speed)
In many respects the russians are ahead of you dudes 100 years, they just have the wrong marketing policy, that's all.

And I hate russians, but I bow in front of their technological research and capacityes.
Reply to this comment


Christopher at Feb, 23 '10 00:33
I understand your ire against us 'muricans. Despite being american myself, the reasons that make me a 'proud american' are far outweighed by the things that make me ashamed. Funny how many great 'american' scientists or engineers are actually first of second generation european or asian immigrants. The only reason we have any technical prowess at all is that we let in the people who have the potential to better our image.
Reply to this comment

Lev Vakulin at Jul, 21 '11 17:48
You are right. And Russians still working on a new and new technologies. Look at last 2011 development there: aquagen.ru/eng/planes/akvaplan/
Reply to this comment

You love Americans, and hate Russians? Must keep you busy. I, however, love everyone and hate their oppressive governments.

Each new generation thinks it invented everything except those established and perfected precepts which they rebel against.

Maybe, upon your part, more than a little sour grapes and arrogance against the colonies?

Remember, there are on statues erected for the scornful.
Reply to this comment

The Ultimate Guide To Ultralight Flying

This is a resource list containing articles, websites and guides that can help you in the not-so-easy journey to flying...