Their allowed gross takeoff weight is no more than 1320 pounds (many horses weigh more). You could buy eighty squadrons of the most expensive ($200,000.00) for the price of the most expensive ($16,000,000.00) horse ever sold at auction. Fixed wing light sport aircraft, in other words, are the common man's answer to the mythical flying horse Pegasus, and just as much fun to ride. 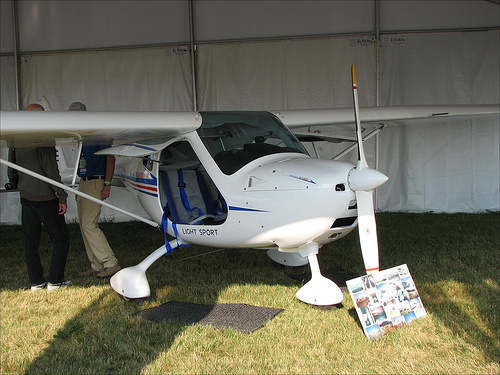 photo by Observe The Banana

What can you expect from a fixed wing light sport aircraft?

The demand for fixed wing light sport aircraft continues to surge. More and more people tired of the rising prices and decreasing convenience of flying with the established airlines have seen the wisdom of owning their own LSAs. In January of 2008, at the 4th annual Sport Aviation Expo in Florida, eleven new LSA models were introduced.

If you're someone who's always wanted, but could never afford, to own your own plane, your time has come. Why not join the thousands of recreational fliers who, thanks to light sport aircraft, have discovered for themselves the freedom of the wild blue yonder?
All you need to start is an Official Faa Pilot License Training Kit.


If you liked this article subscribe to our Free Newsletter

Willian at Dec, 17 '15 15:24
I have a few questions and to anonye who answers thanks i really apreciate it cause i really need to know .1) Can you go to an online college with a ged?2) What are some good online colleges that don't scam you?3) How much does it cost?4) At what age can you start online college? Can you start before the age of 18 as long as your still paying?
Reply to this comment

Here Are Some Of The Best Discussion Forums About Ultralight Airplanes

The Web is huge and full with all kind of sites on about every topic you can think of. But...